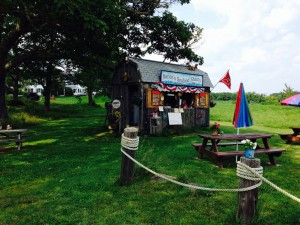 It’s very hard to blog, unless you feel something about the subject. When escaping Brewster House, Mary and I  often speculate on what a great place to live Harpswell Neck will be when we quit innkeeping (don’t get nervous!). The Neck and adjacent islands www.harpswellmaine.org are our escape (only a ten minute ride from Brewster House), and a quietly stunning example of the glacially sculpted fingers into the ocean that comes to mind when most of think of Maine! The ride down Rt. 123 starts with some big farms, and if you look close, you’ll see salt meadows at the ends of the fields.  You might stop in to Nance’s Seafood Shanty (in front of a large gorgeous farm, which reaches right down to tidal marsh)  a few miles onto the road for a fab lobster, clam or crab roll and fresh lemonade.

A few miles south, you’ll have to decide to head straight down Harpswell, or follow the sign west to rt. 24.  Crossing  over Harpswell Cove to Great Island, turn right on 24 and you’ll know your crossing onto Orrs Island, as you drop and twist into the stunning vista of Merriconeag Sound and Gun Point Cove.    The ride over Orr’s Island is a delight of roller coaster turns, dives and climbs as you take in the sparkling atlantic vistas of granite, fir and modest, and the occasional lovely waterfront homes or cottage.  These islands and Peninsula actually include 216 miles of rugged Maine coastline!

Bearing left shortly after leaving Brunswick down Rt. 24 would take you to the real Maine lobster fishing village of Cundy’s Harbor, which  doesn’t really look like anything has changed in 50 years!  Want authentic?  Grab a sandwich at Holbrook’s Snack Bar! 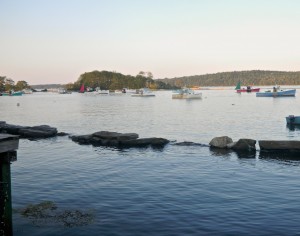 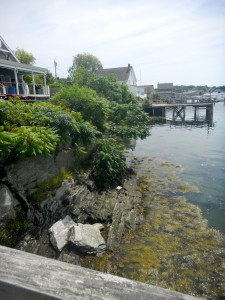 I digress, back south on rt. 24 we come to the Village of Orr’s, just before the longest granite bridge in the world  connects Bailey Island to Orr’s, over the fast running Will’s Gut.http://www.bowdoin.edu/news/archives/summerresearch/003397.shtml.  To your right is Cooks Lobster House, left Morse’s Cribstone Grille.  Either will serve you lunch or dinner right on the ocean!  Around Cooks, many boating opportunities are available, including our favorite new schooner charter, Alert w/ Captains Perry & Bethany  https://www.facebook.com/SchoonerAlert!   Heading south, Mackerel Cove is the textbook picture of a lobster fishing harbor, and just to it’s left, a path for a scenic hike down The Giant Staircase!  Then to one of the Gile Family favorites, Estes Lobster House.  Very reasonable and again, oceanside outdoor dining, facing the sunset!!

There are several art shops, antique stores, quilters, ice cream shops here and there, in places you’d never expect to see them, all over Harpswell. Had we stayed on Rt. 123, rather than crossing over to Orr & Bailey Islands, we’d have cruised by several lovely coves and inlets on our way to the Village of Harspwell.  A mile or so south, there’s a little dirt road to the right that circumnavigates Basin Cove, ending at The Dolphin Restaurant & Marina.  The Dolphin was completely rebuilt a little over a year ago.  The dining room sits right on Casco Bay and is 180 degrees of glass for your eating, drinking and socializing pleasure.  A sublime way to end a great day exploring Harpswell Neck!  Then, back to that killer bed with the ironed sheets and that unbelievable next days breakfast awaiting you at Brewster House…….. 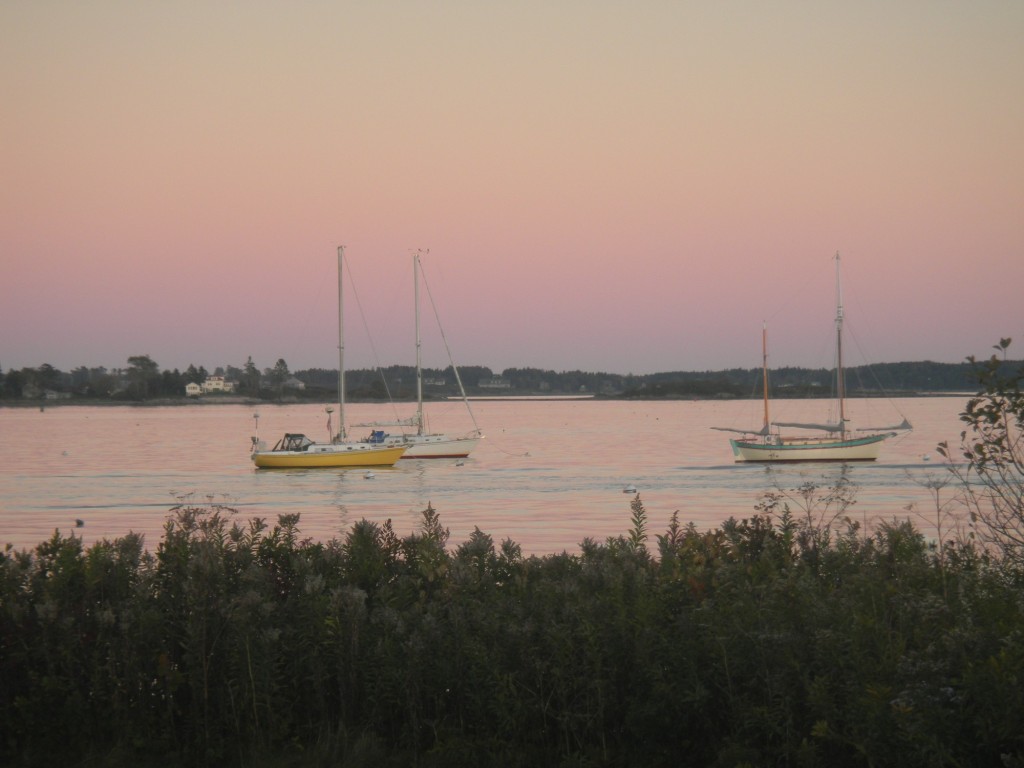 As we conclude the “Plan Your Trip” mini-series, within the Visit Maine Like A Mainer! series, we have some side trips to suggest, if they tickle your fancy.

Starting near the southern part of the state, one of the popular side trips (or a destination, in itself, of course) is the Kennebunks. Aside from being beautiful old New England towns, filled with lovely older homes, they are charming and quaint, with a wonderful drive along Route 35 connecting the two towns. There is also Walker Point, the home of former President George H.W. Bush, and Cape Porpoise, home of both a nice lighthouse and a good lobster shack. There are also a good collection of antique shops along the outlying roads.

If you enjoy the old covered bridges, Babbs Bridge is one with an interesting history. Built in 1864, it was burned by vandals in 1973 and rebuilt, then reopened in 1976. It is one of the nine remaining covered bridges in Maine.

Just north of Wiscasset on US-1 is a turn marked “Boothbay Region”, where Route 27 heads out toward Boothbay and Boothbay Harbor. In Boothbay you’ll find the Coastal Maine Botanical Garden, with its dramatic ocean views and lovely gardens, and in Boothbay Harbor there are interesting local shops, ice cream parlors, restaurants, lobster places, and boat tours of the area.

Near Bucksport is the Penobscot Narrows Bridge, which opened in 2007, replacing the much older bridge nearby. The new bridge has an elevator taking you 420 feet in the air, then two more flights of stairs to the observatory, providing a 360 degree view, with identification panels showing how to locate nearby mountains, lakes and towns.

Nearby is Fort Knox, a defensive fortress defending the area from water attack.

Not much farther north on US-1 is Searsport, home to many antique stores – so much so that it could take days to explore them all.

There are a number of quaint and beautiful locations along the northern coast of Maine to stop and explore. One which we like is West Quoddy Head Lighthouse, the easternmost point in the US. The small towns and villages along the coast are sparsely populated and picturesque.

Wherever you travel in Maine, we hope you fall in love with it, as we have! Let us know your favorite places in the comments!