We gave an overview of the Mid-Coast region earlier in our Visit Maine Like A Mainer! series. The full list of articles in the series is available here. In this article we’ll look at more of the wonderful things available to see and do in the Mid-Coast, all within a 60-90 minute drive of Brewster House. Time and space do not permit an in-depth discussion of every one of the beautiful harbors and villages in this region, so we apologize in advance if your favorite was overlooked! 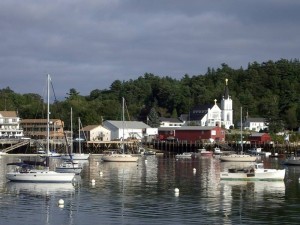 Boothbay Harbor is one of our very favorite locations. Not only is it a beautiful working harbor, but its shops and neighborhoods make for a wonderful place to stroll along, getting a good taste for Maine. We like Boothbay Harbor so well that we once rented a house here, to spend a week in the area. We could easily walk across the harbor on the footbridge, noting the extreme differences between high and low tides, and enjoy a walk through town, pick up a newspaper, and return in time for breakfast. After a day of sightseeing, it is lovely to come into Boothbay Harbor and get a cone of homemade ice cream at Downeast Ice Cream, right on the wharf. 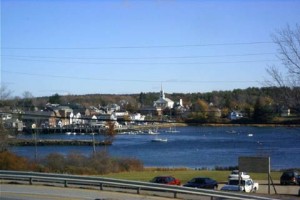 Just a bit farther north, Damariscotta is a picture-perfect postcard setting of a New England town across the river. It has several good choices for lunch, and some nice shops (including a very nice book store) for browsing. Proceeding a bit farther toward the coast, you soon are in the countryside, on your way to Pemaquid Point Lighthouse, established in 1827. The views from the rocky bluff where the lighthouse stands are magnificent. There are great (and entirely different) photo opportunities looking up at the lighthouse from the rocks on either side of it.

Returning to US-1 via Route 32 and New Harbor, we soon come to Waldoboro. If you’re in a hurry, taking Route 90 to Camden will save time, but there are several things you’ll miss. We enjoy Thomaston, with its stately old homes and shady, tree-lined streets, as well as driving down the long peninsula to Port Clyde and Marshall Point Lighthouse. Linda Bean’s Perfect Maine Lobster Roll was born in Port Clyde, and Ms. Bean still owns the General Store there. There are ferries to Monhegan Island, and puffin tours and lighthouse tours available from Port Clyde, as well. U.S. Supreme Court Chief Justice John Roberts owns a home nearby.

Returning up the peninsula from Port Clyde, the lighthouse at Owls Head provides a breathtaking view of Penobscot Bay. It also has one of the few keepers houses that is still occupied (by a Coast Guard family).

Our trip up the coast usually ends with a stop at Camden, where the beautiful harbor can be viewed from the small town park right on US-1, or from Camden Hills State Park. There are also several nice restaurants with views of the harbor for a meal or just a cup of chowder.

There’s no question about it, there’s more to Maine! 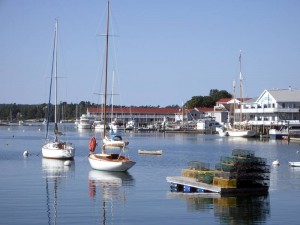 As we continue our Visit Maine Like A Mainer! series, we come this week to Maine’s Mid-Coast region. Some of Maine’s top destinations are located here, including Camden, Rockland, Boothbay Harbor, Wiscassett, and more!

Heading toward the coast, you find Bailey Island and Orrs Island, with scenic points and cottages. North on US-1 is Bath, with antique shops, the Maine Maritime Museum and Bath Iron Works, one of Maine’s largest employers. Driving to the coast from Bath you’ll find parallel state parks on opposite sides of the river, Popham Beach, with its Civil War fort, and on Georgetown Island, Reid State Park, with its rocky crags and sand beach. Five Islands, with its “10 best” lobster shack is nearby.

Driving north on US-1 from Bath, you come to Wiscasset (home of Red’s Eats, another “10 best” lobster shack), then the Boothbay region and Boothbay Harbor with its shops, ships and vistas. Returning to US-1 you’ll find Damariscotta and the Pemaquid Peninsula – one of Maine’s best kept secrets (thanks to @squashbuckler and @walpolebarn for mentioning this). Besides the magnificent Pemaquid Point Light Station, there is New Harbor and whale watching tours, a coastal drive along Route 32, and Shaws, yet another “10 best” lobster shack. 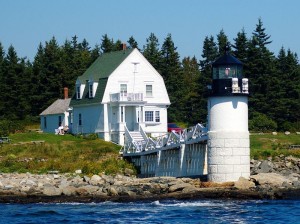 Returning to US-1 you’ll find Waldoboro and Moody’s Diner, Thomaston (home of George Washington’s Secretary of War, General Henry Knox) and its quaint houses and the Maine State Prison Store, and Waterman’s Beach Lobster (another “10 best”), then down the peninsula to Port Clyde and Marshall Point Lighthouse. On the way back to US-1 stop at Owls Head Lighthouse to admire to view over the hilltop to Penobscot Bay.

Next is Rockland and its breakwater lighthouse, and the Farnsworth Museum, then on to Camden and its wonderful views of the beautiful harbor, schooners, and its shops. Try the view from Camden Hills State Park for a truly majestic scene!

A vacation in itself, your visit to Maine is not complete without at least a day trip to Maine’s Mid-Coast region.

If you have suggestions of places you would like us to include in our “Visit Maine Like A Mainer” series, please feel free to post them in the comments, or to Tweet them to us.