Now that the fall foliage season has pretty well drawn to a close, things have slowed down a bit, and we have had a little more time (not much!) to get out and enjoy some of the things we send guests out to see all through the year. 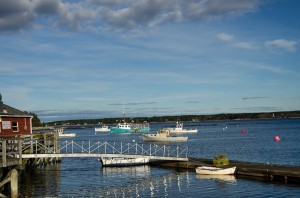 This week we returned to Georgetown Island, just a few minutes from Brewster House in Freeport, where we visited Reid State Park and the lovely village of Five Islands.

Reid has a wonderful sand beach (not that common in this part of Maine), with piles of granite rock at one end, which you walk up like stairs, then view the islands offshore, the beach, and the mouth of the neighboring river. It is a beautiful area, and one we really enjoy visiting and photographing. 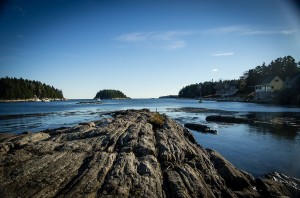 At the very end of the road is Five Islands, home of Five Islands Lobster Co., and its wonderful lobster shack, where you can enjoy your favorite crustacean at a picnic table on the docks, while the lobster boats come and go. This late in the season, the boats were quietly moored, and the lobster shack was closed, but that just makes it an even more picturesque setting to visit! 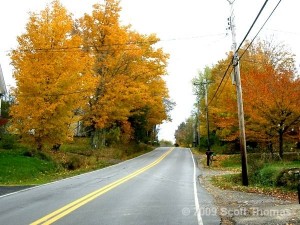 The colors have definitely started to turn, on the back roads leading inland from Freeport.

These just have to be seen!

Regardless of how early our Freeport Maine fall foliage may be this year, one of the best things to do near Freeport is to tour the foliage areas and check out all the fall colors. 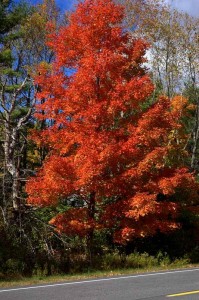 There are a lot of great books on great scenic drives in Maine, and many include drives to see fall foliage. Far be it from us to discourage the use of these books. We have some of them, and we use them, too!

One thing we suggest, that doesn’t seem to be in any of the tour books we’ve seen, is to combine your drive with something else that interests you. For example, you might take a look at our map of Maine lobster shacks and create your own driving tour through the foliage areas, from one lobster shack to the next. Or, you might combine visits to some of our wonderful Maine lighthouses with a foliage tour. Another idea would be to combine both lighthouses and lobster shacks with fall foliage – what an idea!

You can accomplish some or all of those combination drives to see fall colors in our very popular Fall Foliage Surf and Turf package, which provides for two nights at Brewster House, a $50 gas card and our own driving tour of foliage areas (with turn-by-turn maps), plus a gift card for shopping at L.L. Bean (and of course you also have all the other Freeport outlets to visit), and a gift certificate to Azure Cafe, and more.

If you prefer, just explore the area’s scenic back roads and you’re sure to find some beautiful areas!

We’ve had a bit of a debate around the house lately about when this year’s fall foliage in Maine is likely to be at its best. We’ll give you the points of view, and you can cast your vote, and we’ll see how well we do at predicting when the colors will change.

Most years the best time to see fall foliage along Maine’s Midcoast region, and down into Freeport and Greater Portland is from about the beginning of October (possibly the end of September) through almost the end of October, with the peak time being the second and third weeks in October.

The debate has arisen this year (2012) because of the extremely mild winter we had, and the unusually early blooming of all the plants as a result. So the question becomes, “Will that change the dates for fall foliage?”

Ruth’s view is that the trees will behave like the other plants have this year, and they’ll be ahead of schedule, so she says you can expect colors to begin changing in September, and the peak will be in early October this year. As “proof” Ruth points out that some of the trees in the area (mostly along the highway) have already begun to show signs of changing, and it is only August.

Scott disagrees (some would say that is not surprising). He says that the amount of rain we had early in the summer will mitigate the effects of the early spring, and we’ll have a normal foliage season, with the peak in mid-October, or possibly even later. As proof, he looks at our neighbor’s tree across the street, which is always the first tree in the neighborhood to begin the fall foliage color change. In most years that tree has turned vibrant colors by August (photo at top). This year it has barely a hint of color (second photo).

You decide! Let us know when you think peak foliage in Freeport will be this year in the comments. Then come visit it at Brewster House in Freeport!

Nature’s changing fall colors don’t follow schedules imposed by school boards, but follow instead their own pattern as the vibrant annual display begins and ends. From Vermont, through New Hampshire and into Maine, and down into Massachusetts, Connecticut, Rhode Island, the change of colors generally moves from West to East and North to South. At the far northern and western areas, mid-September will begin the color changes, while the farthest southern and eastern areas will not reach their peak until the second half of October. Yankee Magazine’s foliage predictor gives a good overview of this.

For us in Maine, the far northern reaches will begin in September, but along the midcoast, down through Freeport and Portland, most of our change begins in early October, reaches its peak in mid-month, and finishes up in the latter part of the October. You can keep up with the changes with weekly updates from the State of Maine’s foliage website, beginning in mid-September.

If you’re really interested in wonderful foliage travel, a great trip might begin in Vermont in late-September, working your way to New Hampshire’s Kancamagus Highway, and the White Mountains by early October, then into midcoast Maine, and Freeport by mid-October. To carry it even further, from there you can head south, seeing southern New England, then down to the Blue Ridge Mountains, where you’ll find fall foliage that is beautiful, and later still than the New England fall foliage.

Our Fall Foliage Surf & Turf special (called “a steal of a deal” by Smarter Travel) includes two nights at Brewster House, a welcome basket, our own self-driving fall foliage tour with detailed maps and directions, a $50 gas card to help with the driving, a two hour schooner cruise on Casco Bay (can you imagine viewing foliage from the decks of an antique schooner, matey?), plus dinner, shopping and more.

If you’re planning a visit, though, you should make lodging reservations soon – especially if you’ll be here on a weekend! At our bed and breakfast in Freeport Maine we’re already seeing a lot of weekend bookings for October (only partly due to fall foliage plans – there are also college reunion and homecoming weekends in October).