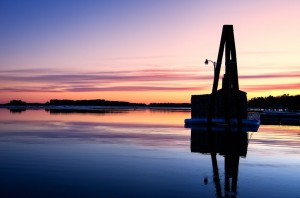 The winter storm of “potentially historic” proportion (and unofficially given the whimsical name “Nemo” by the Weather Channel) is behind us, leaving almost two feet of white powder in its wake.

We heard the 40-50 mph wind gusts all through Friday night, and found they had strewn snowdrifts erratically through the yard. One side of our house was nearly bare of snow – with a clear view of the grass, while the driveway had drifts approaching four feet, and nearly five feet in one place.

We spend much of Saturday running the snowblower to clear the driveway for our guests, most of whom enjoyed huddling by the fireplaces in the cold temperatures. We were very grateful not to have lost power during the storm!

Sunday, after seeing off the last of the guests, we took a drive around the area and enjoyed taking photos of the fresh, clean snow.We also ventured down to the South Freeport pier to get the sunset photo at the top of this post!

Hope to see you soon, to get your own photos of Freeport!

There are reports this morning that at least 84,000 people are without power in Maine. Thankfully, Brewster House is not among them, and our guests were provided a dry, if not quiet (with roaring winds) night. 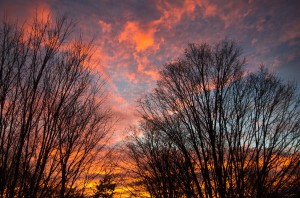 The winds stripped leaves from many of the trees, but looking outside in the early morning dawn, things look wet, but otherwise normal.

We’re thankful for the thoughts and prayers of all our friends and guests, and urge you to continue to pray for those who suffered damage or loss.

With Hurricane Sandy bearing down on New Jersey as I write, there is a lot of media hysteria, even here in Maine, about the devastating damage we can expect from this gigantic storm. 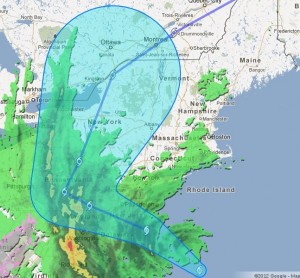 Naturally, we’ve been looking very closely at the weather reports, and it looks as though we’re in for some high winds tonight, possibly gusting up to Tropical Storm levels, along with several inches of rain. With our high tides and the storm surge, this makes it likely that the lower areas of Freeport, and surrounding communities, can expect some flooding along the coast, and the winds make power loss likely.

Some of our wonderful guests have expressed concern, and while we are definitely taking a few precautions, our real concern is for our friends, fellow innkeepers, and all people in the path of the storm in the New Jersey, Pennsylvania, and New York areas, particularly, where the brunt of the storm is likely to hit.

Our thoughts and prayers go out to you all.

When we were children it seemed people always wondered whether or not we would have a white Christmas. That is, would there be snow on the ground by Christmas Day.

We can’t answer that on (though we could hazard a guess…), but this year we had snow before Halloween.

By Saturday evening (October 29) the storm that had formed over the southern Atlantic coast had moved north, dropping snow on Washington, D.C., and several other locations from New Jersey to Connecticut. It went up the east coast of the US, then the winds backed up onto northern New England, forming a classic nor’easter.

The storm began to drop big, soft, white, flakes on Freeport about 7:00 p.m.

We awoke in the middle of the night to find the heavy weight of the snow had knocked the power out, and began planning for a breakfast that could be prepared without electricity.

Our stove is gas (propane, actually), so we quickly changed the planned breakfast of a baked egg dish and scones (that needed to be baked in the morning) to Ruth’s special scrambled eggs with bacon, roasted potatoes, and muffins – all of which could be prepared on top of the stove.

The next challenge was the coffee. Since we use French presses the only requirements were boiling water and grinding the beans. The water was easy, since we could boil it on the stovetop, but the electric grinder wasn’t going to work. We double-bagged some beans, and smashed them with a rubber mallet, to get them as finely “ground” as we could, and served up fresh coffee – just not quite the “usual” strength.

The guests were all delightful about their “adventure” and ate breakfast by candlelight. Two couples decided to sleep in, just appearing for a cup of coffee, while the others enjoyed the sense of camaraderie that comes from shared difficulty.

Just as the last guests were finishing their breakfast, the lights flickered, then stayed on. We all breathed a sigh of relief, as the power was back, hot showers awaited, and a good time was had by all (wasn’t it?).