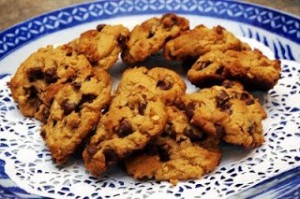 One of the challenges at Brewster House, like most bed and breakfasts, is coming up with recipes that are good enough to use, but also meet special dietary requirements of some guests.

We often seem to have guests who have restrictions on wheat flours or are otherwise gluten-free, so afternoon snacks of cookies, cakes, etc., can be a bit of a challenge.

3. Bake at 350 F for 12 minutes or until puffed and golden (Cookies will be soft in the center). cool on baking sheet 5 minutes, remove to wire rack. 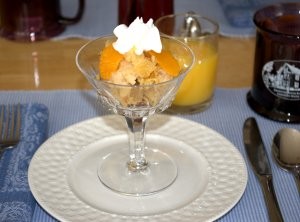 Modified from a recipe received from a friend, this fruit dish is similar to a bread pudding — and very popular with our guests.

Beat egg in separate bowl, add sugar and beat until thick. Add crushed pineapple (NOT drained) and pour over bread mixture and mix Pour into 11×7 in. baking pan.

Bake 45 minutes at 350 degrees F until brown around sides.

Spoon into individual servings (at Brewster House, we use champagne glasses with stems).

Garnish with 3-4 mandarin orange slices and a small amount of whipped cream, and serve warm.

If this makes more than you need, you can freeze the excess and warm it up for another time. 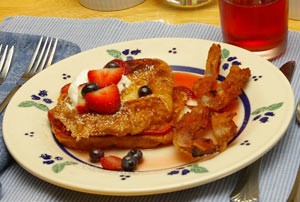 A simple, yet delicious, syrup made from strawberries and sugar, to make for a very special dish.

Combine all ingredients in a saucepan, and let stand 30 minutes or until sugar dissolves.
Cook over low heat, stirring occasionally, 5 minutes or until warm. Serve over Croissant French Toast

A delicious French toast, made with croissants and served with a strawberry compote, this unusual and delicious variation on French toast is really a winner.

Melt 1 tablespoon butter in a large nonstick skillet (or griddle) over medium heat. Add four croissant halves, and cook about 2 minutes on each side or until puffy and golden brown. Repeat procedure with remaining butter and croissant halves.

Serving Ideas : Sprinkle a few blueberries on top for a colorful presentation.

NOTE: If croissants are not stale, they will not absorb the batter as fully, and will not plump as much when cooked. 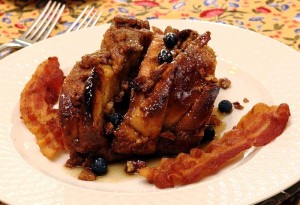 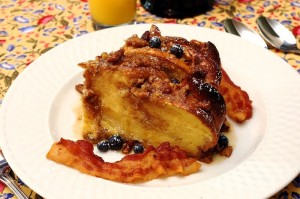 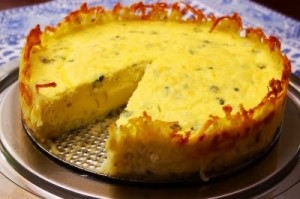 Like many innkeepers, we find that a number of our guests need gluten-free meals. In searching for this type of thing, Ruth came across this quiche from Martha Stewart, which we served today, to high praise from all the guests!

We served it as presented, but will be trying it in the near future with fresh spinach and sun-dried tomatoes added, as well.

Directions:
Preheat oven to 375 degrees F. Brush a 9 by 2 1/2 inch springform pan with butter. Line the sides of the pan with strips of waxed paper (the same height as the pan); brush paper with butter.

Squeeze excess moisture from hash browns. Mix in a bowl with butter, 1 egg, 1 teaspoon coarse salt, and 1/4 teaspoon pepper. Pat into bottom and up sides of prepared pan, using a moistened dry measuring cup. Place on a rimmed baking sheet; bake until set, 15 to 20 minutes.

In a large bowl, whisk sour cream, goat cheese, 1 1/2 teaspoons coarse salt, and 1/4 teaspoon pepper until well combined; whisk in 11 remaining eggs. Pour into crust, and sprinkle with scallions. Bake until set, 45 to 50 minutes. Unmold quiche, and peel off waxed paper before serving.

Serves 6-8, depending on serving size. 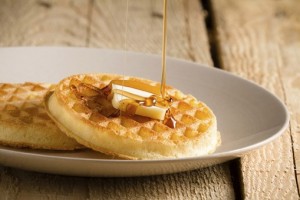 This is a delightful treat, which really dresses up Belgian waffles especially in the autumn. 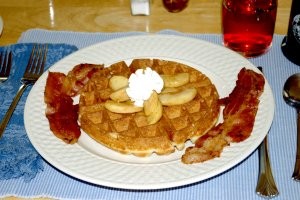 These wonderful, make-ahead, Belgian waffles are light and simply delightful with our Maine pure maple syrup, or our blueberry compote!