Just a mile or so north of Brewster House on US-1, as you leave Freeport, Maine, there is a “Moose Crossing” sign. It fascinates many of our guests. 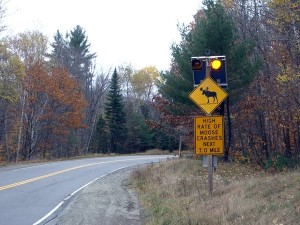 The conventional wisdom is that, if you want to spot a moose, you should go inland, to one of the areas in Maine known to have a fairly sizable moose population, then make sure to be there at either dawn or dusk, and you’ll be likely to see a moose, or maybe even more than one. We’ve tried that, and it certainly is a good way to go about finding a moose.

One of our guests was determined that he was going to see a moose near the moose crossing sign, so he got up early and headed up US-1, and figured he’d go find a coffee shop open all night, then see if there was a moose near the sign.

When he returned for breakfast, he told us he had seen a moose, off in the brush near the “Moose Crossing” sign. Since this fellow was known to exaggerate a bit, we were naturally a little dubious. We thought maybe he had seen a deer.

Our skepticism increased when he came back the second morning saying he had seen a moose that day, too! But we realized he was giving us a true story when his tale was confirmed by another long-time guest that we trusted, who had gone out the same route for a drive, and had seen a moose in the same spot!

So you can follow the conventional wisdom if you’d like to see a moose. Or you can come to Freeport, get up early, and hang out near the “Moose Crossing” sign. It seems to work!