Our Valentine’s Day special has grown over the years from weekend special into a month-long package – so much so that this year our February is for Romance package was named one of the Top Ten Romantic Getaways.

As most of our guests know, our daily breakfast menu, as well as our afternoon refreshment menu, changes from moment-to-moment, so who knows what we’ll be serving while you’re here (reasonable requests may be possible, if received in time). However, it is very likely that, especially in February, we’ll have some chocolate on the menu! 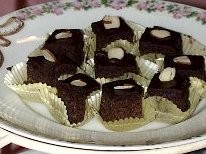 Last year, for our Flavors of Freeport dessert, all the local B&Bs had agreed to serve a Julia Child dessert, in honor of the (then) recently released film, Julie and Julia. As our contribution, Ruth prepared a wonderful Chocolate Almond Cake (yes, that is the cake from the film) from Mastering the Art of French Cooking. For the event, we cut the cake into bite-sized pieces as shown in the photo, but of course you can serve it however you like it!

Place the chocolate and rum or coffee in the small pan, cover and set in the larger pan of almost simmering water. Remove pans from heat and let chocolate melt for 5 minutes or so, until perfectly smooth. Lift chocolate pan out of the hot water, and beat in the butter a tablespoon at a time. Then beat over the ice and water until chocolate mixture has cooled to spreading consistency. At once spread it over your cake with spatula or knife, and press a design of almonds over the icing.