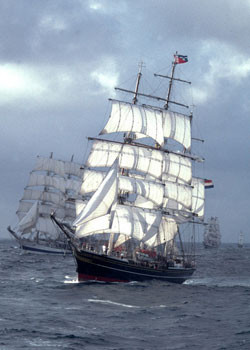 July 18 – July 20th will mark the Portland visit of Tall Ships 2015, the first return of this event in 15 years, and the final stop of the 2015 Tall Ships Challenge!  The Challenge being a series of races beginning in Cape Charles,Virginia which makes stops up the East coast in Philadelphia, Camden, NJ, and Greenport, NY before finishing in Portland.  These races are crewed by young people in a friendly competition, as a means of sail training and education.

Portland will host at least eight tall ships, being lead by the US Coast Guard barque Eagle (295’) , and  including the Oliver Hazard Perry (210’ square rigger out of Newport, RI), the Picton Castle (179’ baroque home-ported in Lunenburg, Nova Scotia), and the El Galeon (180’ from Seville, Spain).  The list of participating sailing ships is still being finalized, but will likely include the Bowdoin, 100’ schooner famed for it’s Arctic explorations and formerly captained by Donald MacMillan http://www.bowdoin.edu/arctic-museum/biographies/macmillan.shtml (who grew up beside Brewster House), and other Maine based windjammers.

If you’ve never had the privilege of seeing and hearing these amazing specters from our past under sail, you owe yourself the opportunity to experience what is a deeply evocative and emotional experience!  It is truly a unique historical moment you will never forget!!  The fleet will sail in parade fashion into Portland Harbor on July 18th at 1PM, and dock for tours along the Portland waterfront. You may tour the Eagle for free, but tickets to tour all of the ships may be found at www.tallshipsportland.com for $15 (which will support sail training and education).  Ship tours will be offered from 9AM to 9PM on Sunday, and 9AM to 6PM on Monday.  The event will also include live music and food, which is remarkable in Portland, SO DON’T MISS THIS SUMMER HIGH POINT!

As I write this blog, Brewster House still has several rooms available, so make this getaway complete by booking your stay with us NOW!

One thought on “PORTLAND VISIT OF TALL SHIPS”